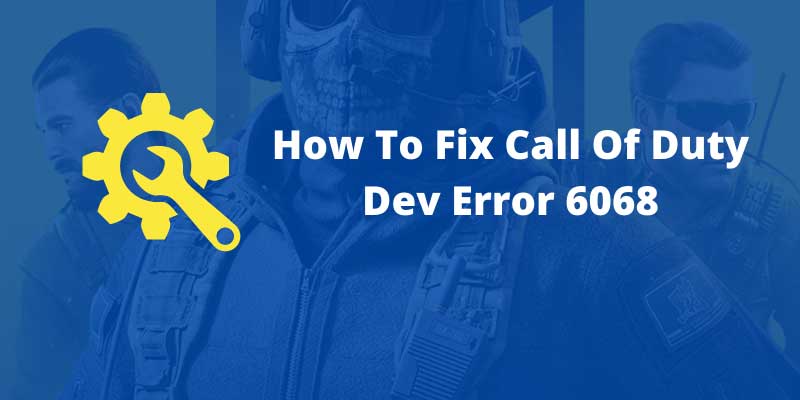 Call of Duty is a first-person shooter video game that has been developed by Infinity Ward for Microsoft Windows and other platforms.

This video game has a single-player mode as well as a multiplayer mode. It was first launched by Activision in 2003 with initial versions of the game being set in the time of World War II.

The later installments have explored different settings intruding on the Cold War and futuristic landscapes. The game rose to popularity in 2007 with the release of its fourth installment “Call of Duty 4: Modern Warfare” which introduced the game in a modern era setting.

It proved to be the turning point for the series, leading to the creation of the very popular “Modern Warfare” sub-series. The game has only increased in its popularity and now has a loyal fan base of over 250 million gamers.

The latest installment of the franchise “Call of Duty: Modern Warfare” was released on 25th October 2019 for Microsoft Windows, PlayStation 4, and Xbox One.

Dev errors are quite common in Call of Duty and have different codes. Some common Dev error messages that pop up in a dialogue box are Dev error 6606, Dev error 1110, etc.

Dev errors occur when your PC is not compatible with the system requirements of the game. Dev error messages popup when your PC lacks any system specification that the games require and needs to be upgraded.

Minimum requirements needed for Call of Duty to run on your PC:

Therefore, first, you have to check the PC specifications properly. Since such Dev errors occur as a result of some missing files, you need to find these files and replace them. Abruptly shutting down your device or Malware attacks can corrupt your files.

Fixing the errors in Call of Duty can be done in two ways – using Steam Client or using Blizzard Battle.net.

What Is Development Error 6068?

Most personal computers have a number of bugs in programming that can result in a failed gaming experience.

Error 6068 is common in all versions of the Call of Duty video game. It is usually caused due to the installation of corrupted Direct x software. It can also be due to an outdated Windows OS, System Driver, or due to the incompatibility of the device system with the requirements of the game. Development error 6068 pops up a message in a dialogue box and freezes your game

When Dev error 6068 occurs, the game crashes with an error message in the dialogue box. This kind of error occurs due to a software malfunction and is not a hardware issue.

To solve this problem first check the files:

The Call of Duty game simulates infantry and firearms and has special features like computer-controlled soldiers that give players the feeling of an actual war. Players can pull up a firearm and experience a stunning feeling from the explosive noises. To experience such simulation fixing the development errors is important. First of all, the specifications required for the game should match your computer system, then replacing the missing files and relaunching the game will help you to experience the game in a simulated environment.

Difference Between AMD B550 Vs. X570 Chipset

What Is Investing And Why Should You Care

Difference Between AMD B550 Vs. X570 Chipset